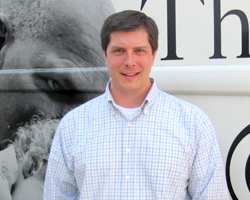 Bryan Summers looks like an old pro when hes going through the process of giving blood at the Elanco bloodmobile. Not only has he been donating at work for years, but he also gives at his church, St. Marys, regularly. Volunteering at a blood drive at his high school sparked a fire in Bryan that would continue for many years to come.

His competitive spirit pushed him to do even more when he was in college at Clemson University; every year during the week of the BIG game against University of South Carolina, he participated in a Battle of Schools blood drive. From there, continuing to donate throughout his adult life has come naturally. "It's just an easy way to give back," Bryan commented. Bryan is excited about recently receiving his Four Gallon Pin, AND his new umbrella in the mail for his consistent donations last year.

Thank YOU, Bryan for your continued support. 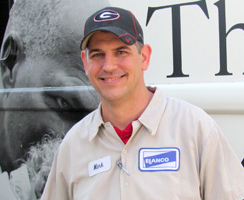 Sporting his University of Georgia cap (Go Dawgs!), Mark Wise proudly announced that he had been donating four times per year for the last four or five years. He was first inspired to give when he had a friend who developed leukemia and needed blood. After he donated to help his friend, Mark asked himself, "If I can help him, why cant I help others?" Since then, Mark has regularly donated at Elanco, Belvedere Elementary, and at the main center of Shepeard. He recently donated when his brother-in-law needed surgery. "Even if you dont have a lot of money, you can always donate blood!" Mark wisely observed. He also was very appreciative of his umbrella sent to him by Shepeard for donating four times in 2010.

Thank YOU, Mark for your continued support.

How your donation helps: